I get a lot of requests along the lines of ‘can you frame’ or ‘do you frame’ to which the answer is usually ‘yes’ but a recent arrival at the workshop was just a little bit special.
A keen Liverpool fan had managed to acquire a signed Jamie Carragher Liverpool shirt from this season. 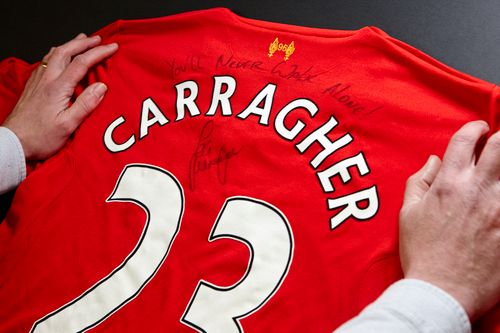 This is Jamie Carraghers last season playing with the club after a record breaking career and which fan wouldnt want this sort of sports memorabilia.
Particularly as the proceeds from the shirt sale were in aid of Jamies Foundation which helps children in Liverpool.

The client went with a thick black frame as they were unsure originally where the item would hang. They had two possible locations, both with neutral coloured walls but one with a lot of light, the other where the shirt may be lit with a dedicated picture frame light. The mount was a matt black and as the shirt also came with a Certificate of Authenticity it was agreed that this should also be included in the framing. The shirt was only going to be displayed with the signed rear section of the shirt so a matt black mount was chosen rather than sandwiching the shirt in glass.
The dimensions of the areas where the shirt was to hang also meant folding the bottom of the shirt a little to lower the overall footprint of the frame. 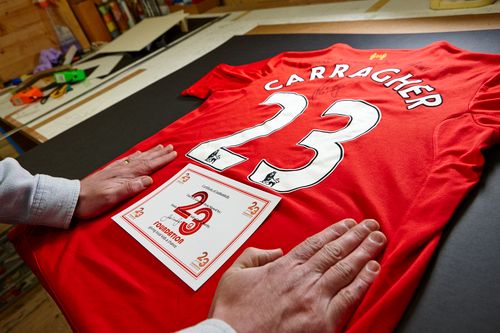