A customer from Ballymena called in recently who had been at the legends snooker tournament at the Waterfront Hall in Belfast earlier this year.
He had sourced a photo of Stephen Hendry lifting the world snooker trophy at the tournament and had got Stephen Hendry to autograph it for him.
He asked if I could frame it for him….
….as usual with my blog entries theres a twist in the tail, could he frame it for me like the one he has framed of Steve Davis from the same tournament five years ago.
I partially recognised the moulding on the Steve Davis frame but thought it was from a supplier who had since went out of business, I asked him to leave it with me and I would see if I could source the same material.
After ringing round a few contacts and leaving messages with the frame description with other suppliers across the UK and Ireland, I managed to source enough matched moulding to finish the set and the customer was delighted. 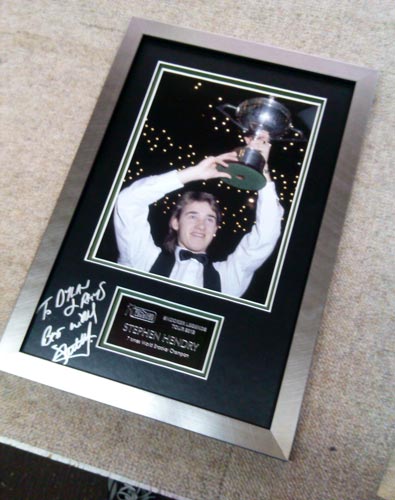