Following on from the framed crisps in my last blog post I have another unusual framing request to share with you.
A woman rang me recently from Antrim asking the usual ‘can you frame…’ question and this one was one that really got me interested, particularly when I heard what it was for and its given me some ideas of my own.
Her son was approaching his 18th birthday and she wanted to present him with something unique and unusual, something incredibly personal so I said I would come out and have a look at what he had in mind. She had told me over the phone that it was just something small and that she wanted a couple of the items framed but not too big a size so as they could be moved when she eventually kicks him out (sorry, he leaves home).
“Something small” turned out to be a box of over 300 toys cars and 150 pieces of train track. Now I would love the challenge of framing the lot in one go but it would be slightly ambitious to call it portable.
I took a sample of the toys back to the workshop, went through a few layouts, sent her the photos by email and we agreed on a couple of layouts.
The items were attached to white mount card with a plywood backing frame for support and rigidity and framed in a 5 inch spaced frame with glass.
They signed a small note ‘Happy 18th, love Mum and Dad” and I placed it in each frame.
Its certainly a one off and the first time Ive framed part of a childs train set, particularly as it is for someone called Thomas! 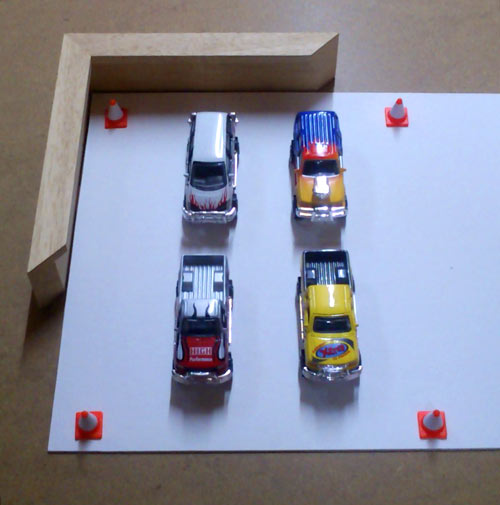