↓ Skip to Main Content
Home › framed items › Use the force….

One of my regular clients from Belfast is a big Star Wars fan. To say big, I mean eats, sleeps, breathes Star Wars. He is part of the emerald garrison and has his own Stormtrooper costume.
With the launch of the new Star Wars Rogue One film (the best film since the original trilogy in my opinion!) he arrived up at the workshop with this original one sheet movie poster.
He mentioned that genuine original 1977 star wars posters now go for thousands or tens of thousands and original star wars toys in packaging can go for the same. Maybe its time to dig out the old toys from the loft!
The poster was framed to match the other posters in his collection although his old Star Wars room has now become two rooms, and a cupboard, and part of the garage, and… 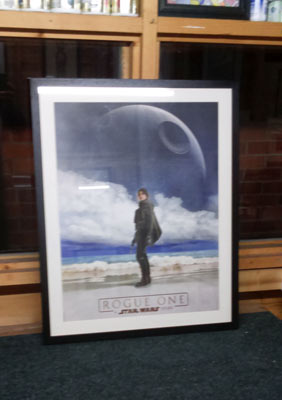