the Lions roar down under…

A client from Carrickfergus contacted me last month about some framing of some special rugby shirts he had acquired.
That was a bit of an understatement as the shirts involved were a signed British and Irish Lions rugby shirt and a signed Australia rugby shirt.
And again thats not the full story either, both shirts were signed whilst he was down under with the recent victorious Lions tour of Australia.
The shirts were not only to be framed but the frames and framing were to document his entire trip on this once in a lifetime tour.
The shirts, some photos on the trip, ticket stubs and other memorabilia collected whilst on the tour were all to be framed together, a complete history in two frames of the whole journey.
We gave the frame some depth to allow an almost 3 dimensional effect to the framing, we decided to leave space between the glass and all the objects in the frame. Deciding placement was an ongoing process with varying the selections of objects until we got it just right.
The shirts were framed independently as they then became a significant weight and it was important to get the selection, groupings and frame and mount right first time for such important pieces of not only sporting memorabilia but a physical record of a trip of a lifetime.

The framed shirts are now hanging in the clients games room using mirror plates to make sure they stay there as long as they are required.
This is one example of how this job is not just about framing a couple of framed rugby shirts but a reminder of not only the successful British and Irish Lions tour of Australia but more importantly the small part my client played supporting the team and his journey getting there. 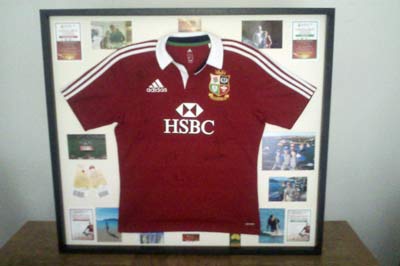 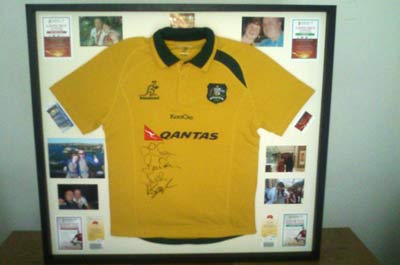