Life isnt about waiting for the storm to pass…

…its about dancing in the rain. Or so the saying goes.

About a month or so ago my friend, neighbour and photographer Joe Fox contacted me regarding an exhibition he was arranging on behalf of local dance company DU Dance. DU Dance were having three exhibitions of their photographs taken by Joe over the last 12 years as part of their BelFEST 15 celebration of youth dance.

The exhibitions are part of a week long series of events including flash mob events in City Hall and Writers Square as part of Culture night and an evening Youth Dance showcase at the Theatre at the Mill Newtownabbey featuring groups from all over the British Isles.

The photographic exhibition was in three parts, two with mounted photographs on display boards at Belfast City Hall and the Theatre at the Mill and one main exhibition in the Crescent Gallery in Belfast.

I had worked with Joe and DU Dance before for their last exhibition in the Ulster Hall and they were going to use some of the framed images from that event in this showcase and update it with some of the last few years images. I was to match the frames and mounts to the same dimensions and style as the previous ones so they would look uniform. I also took in all the older frames and cleaned them up and repackaged them for transport down to the gallery.

In all there were 19 images to be displayed in the gallery which is a lot to package up and transport as one entity. Each photo was mounted in an off white mount with a timeless black frame.

The frames were all hung in the Crescent Gallery both as an exhibit and as the backdrop for a series of photography talks Joe was delivering as part of the festival.

I wish them all luck for their events as part of Culture Night and at the theatre and hope they dont have to dance in the rain! 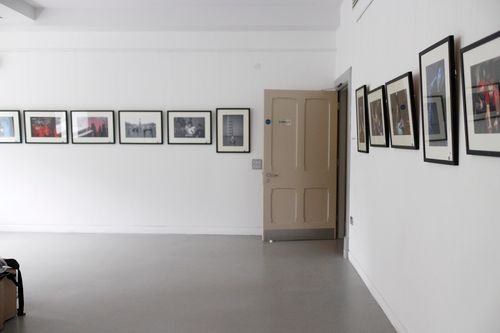