A true unique piece of history…

A lady from a village just outside of Ballymena arrived down one day last month with a true family heirloom. It was the match programme from the 1943 All Ireland Hurling final between Antrim and Cork.

Her father had played for Antrim and was part of the team on that historic day. It was the first time Antrim had reached the All Ireland Final and have only ever been in two.

Cork won that time and rumour had it that the Cork team gifted the Antrim squad two crates of poteen at their hotel the night before the final. This might go some way to explaining the loss on 5th September 1943.

We believe that this particular game programme may well be the last version in existence, a true one off and so was framed to museum quality with white museum mount card, gilt frame and non-reflective glass.

An honour just to hold this piece of history. 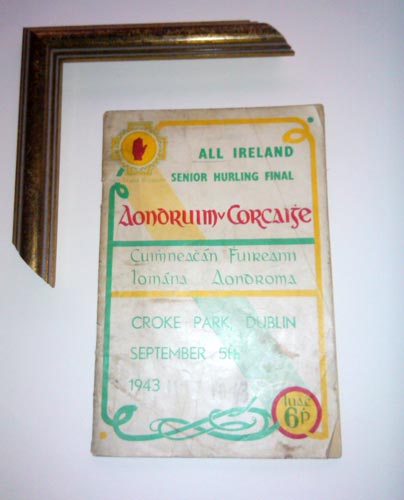