↓ Skip to Main Content
Home › framed items › So where are you sitting then?…

So where are you sitting then?…

As you are probably well aware Summer is here and we are in the height of wedding season here in Northern Ireland.
Everyone likes to put their own individual touches on their wedding and a bride to be from Carrickfergus turned up a couple of weeks ago asking if it was possible for me to frame her table plan.
She had chosen an album theme for the tables with each table designated a particular love album cover or single to sit at. The overall theme then was ‘All you need is love’.
She supplied the individual themed table layouts and the seating plans with names attached, something I wasn’t sure my insurance would cover me for if Id put Aunty Lily and former uncle Bill back together again at the wrong table! (names changed to protect the guilty, ok I made that bit up)
The cards were assembled in order under close supervision and mounted on a white mount with a large 2 inch deep white frame. As the layout was initially going to be displayed on an easel at a wedding reception right into the night I advised fitting the frame with perspex rather than glass, due to the proximity with revellers! They were going to hang the whole display at home after the wedding as well.
Finished it looks great and is a novel approach and something which just adds another one of those great professional personal touches to the whole day. 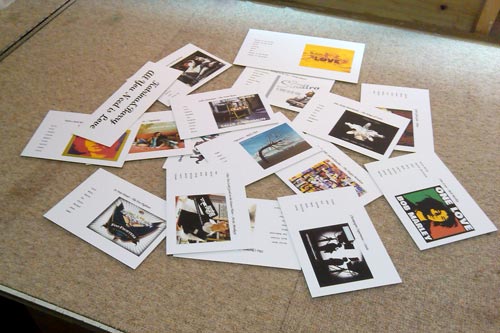 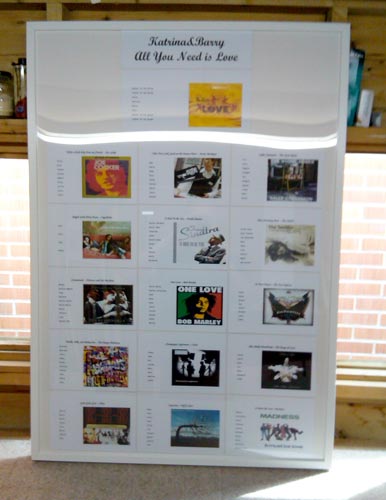